This article is a product of the Standards and Education Committee of the Australian Cattle Dog Club of America with appreciation to the many breeders, scientists and others who have contributed over the decades to our understanding. A few of those directly helpful have been credited below.1

While secondary to features more critical for a working dog, the correct colors and coat patterns in the Australian Cattle Dog are integral to breed type. As such, these features can be a lively, even passionate, topic among breeders, exhibitors, breed historians, researchers, judges, and other enthusiasts.

Selecting for color and coat patterns as part of breed development is not a recent development. As early as the first century AD, Roman agricultural authority, Lucius Junius Moderatus Columella wrote that shepherds preferred a white sheep dog “because it is unlike a wild beast, and sometimes a plain means of distinction is required in the dogs when one is driving off wolves in the obscurity of early morning or even at dusk.”2 With respect to the Australian Cattle Dog, some speculate that early breeders selected for a unique coloration to differentiate the breed from the ever-present dingo or to distinguish their breeding program in other respects.

As we attempt to answer frequent questions and provide better verbal descriptions and pictorial representations of the proper Australian Cattle Dog according to US and Australian standards, researchers are rapidly unraveling the genetics of coat color and patterns. In the future, this research will increasingly inform our discussion around color and patterns called for in the breed Standard as well as the undesirable departures from the Standard. In this article we will include a few references to genetic information about the Australian Cattle Dog and some resources on relevant color genetics.
In the first section of this article “The Basics” we’ll review items important to all standard coat colors and patterns. This will be followed by more detail on each color and pattern and common faults.

The Australian Cattle Dog standard calls for two primary colors: blue and red speckle. These colors are achieved through the intermingling of white hairs with black hairs to create the blue dog and white hairs with red hairs to create the red speckled dog. This pattern of white and colored hairs is sometimes mistakenly described as merle. Actually, the patterns appear to be governed by ticking/roaning genes (T locus), not the merling gene (M locus).3

Red speckle and blue dogs are interbred, and proper red color is genetically dominant. Color must clearly be either blue or red speckle and not appear as a mixture of both colors nor should either color appear as predominately white with spots of red or blue color.

The nose, eye rims and nails of both blues and red speckles are black and eye color is dark brown. Colors not called for in the Standard (liver, chocolate, lilac, etc.) are incorrect and faulted severely. 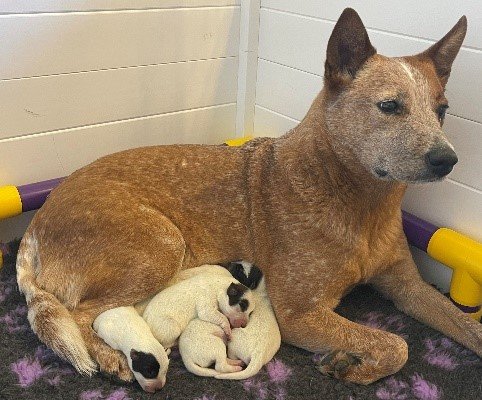 At birth pups often have visible markings on their heads or tails but pups can also be solid white. The markings are black patches on the blue dogs and red patches on red speckle dogs. Red and black markings on the body also occur but are considered undesirable. The litter shown here includes red puppies and a blue puppy.

The distinctive blue or red roaning pattern develops in the white areas over the first few weeks after whelping. While not mandatory, virtually all Australian Cattle Dogs, whether blue or red speckled, have a white marking on the forehead of varying shape and size. This marking is not specifically mentioned in the standard, but it is called a “Bentley” mark allegedly named for a Tom Bentley and his dog that carried the mark. The Bentley can be seen in most photos in this article and is completely normal breed feature. 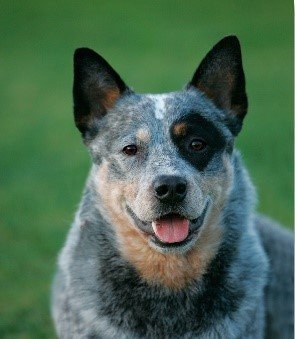 Ringed tails (colloquially called “racoon tails”) or other white on the tail are seen in both red speckle and blue dogs. This is a breed characteristic and just as acceptable as self-colored tails as long as the tails are not a solid white. 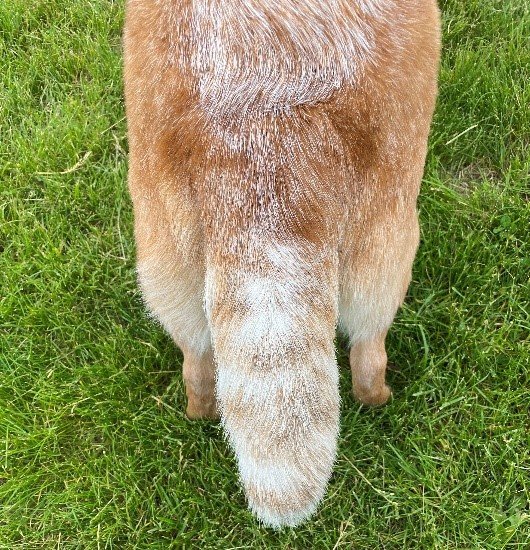 Breed legend suggests that the extreme white comes from the introduction of Dalmatian into the development of the Australian Cattle Dog. This remains unproven genetically and many doubt this origin story.

The color should be blue, blue-mottled, or blue speckled with or without other markings. The permissible markings are black, blue, or tan markings on the head, evenly distributed for preference. The forelegs tan midway up the legs and extending up the front to breast and throat, with tan on jaws; the hindquarters tan on inside of hindlegs, and the inside of thighs, showing down the front of the stifles and broadening out to the outside of the hindlegs from the hock to the toes. Black markings on the body are not desirable.

Tan Markings on Blue Dogs
The allowable positions of tan markings on blue dogs are in the usual locations for dogs that carry the genes for “tan points.” On a tan pointed dog tan usually appears as “pips above the eyes, on the sides of the muzzle extending to the cheeks, as pips on the cheeks, on the front of the neck just below the head, as two triangular patches on the front of the chest, on the lower legs and feet (and inside of the legs), and as a patch underneath the tail (and sometimes along the bottom edge of the tail too)”.4 Tan is also commonly found along the front edges of and inside the ears of the blue Australian Cattle Dog.

Tan may vary in shade from a pale to a very deep rich color. The richer the tan the better. As stated in the Standard, tan undercoat is permissible on the body providing it does not show through the blue outer coat. The tan markings are found on virtually all blue Australian Cattle Dogs although these are not required. Black penciling on the toes is a common feature of the tan pattern.

A blue dog without the tan markings is rarely seen but should not be faulted as tan markings are permissible, not mandatory, markings.

Sidenote: Creeping Tan Fault
Creeping tan is a genetic pattern, found in a number of breeds, where over time tan extends into areas not called for in the Standard. This can lead to a blue dog eventually appearing red, perhaps with just a blue saddle. 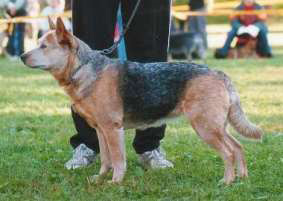 Black Markings on the Head and Tail
Black markings on the head (often presenting as masking or eye patches) and tail are completely normal and commonly found. These markings are not considered to be “on the body” and should not be faulted.

Black Markings on the Body
Black markings (patches) on the body of a blue dog are sometimes found and are not desirable. These are both color and texture faults. However, these faults do not impact working ability. When comparing a dog with a body marking, other conformation or structural faults should be more heavily weighted.

Body markings of other colors are not generally found, however, if present they should be considered inconsistent with the Standard and faulted accordingly.

Undercoat
The undercoat in the blue colored dogs may be black and or tan. If tan, it should not show through the outer coat. 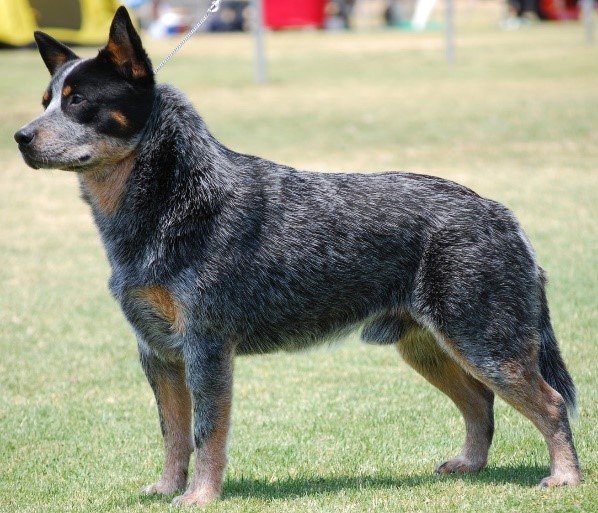 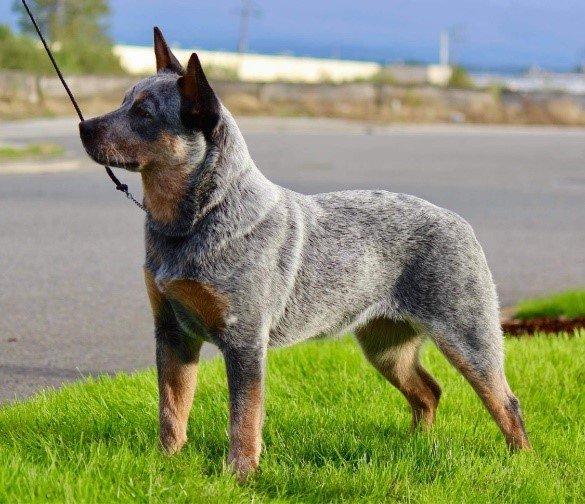 Blue Speckle
This pattern is produced by small, irregular groups of white hair clustered together and distributed more or less evenly throughout the coat. As a general guide these clusters are up to about one inch. 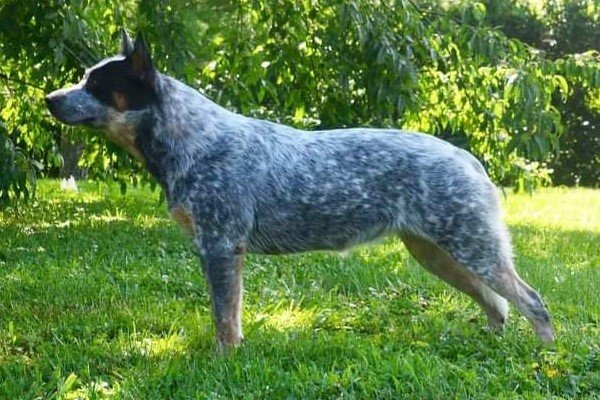 Blue Mottle
The pattern is produced by irregular areas of white hair slightly larger than speckle distribution more or less evenly throughout the entire coat. As a general guide, these areas of white range in size from approximately one inch to 1 1/4 inch. White areas larger that this are a mismark and are undesirable. 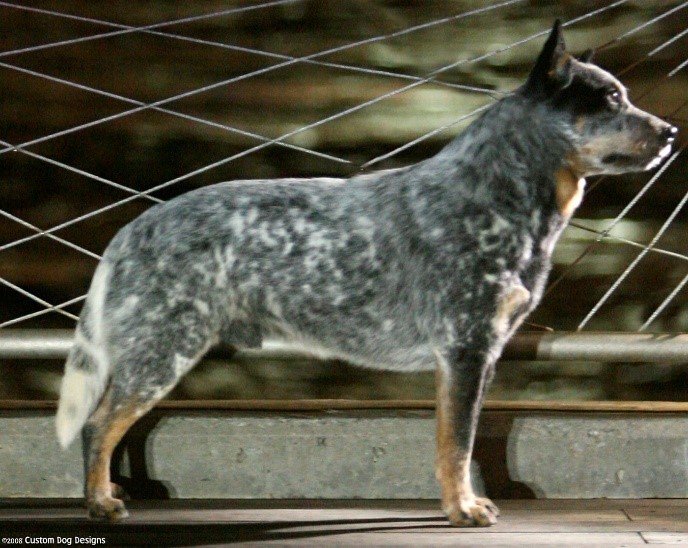 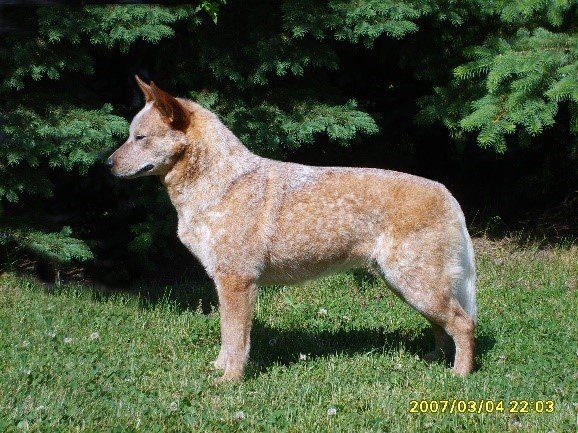 Red Markings on the Head and Tail
Red markings on the head (often presenting as red masking or eye patches) and tail are completely normal and commonly found. These markings are not considered to be “on the body” and should not be faulted.

Red Markings on the Body
Red markings (patches) on the body are sometimes found and are permissible but not desirable. These are both color and texture faults. However, these faults do not impact working ability. When comparing a dog with a body marking, other conformation or structural faults should be more heavily weighted.

Body markings of other colors are not generally found, however, if present they should be considered inconsistent with the standard and faulted accordingly.

Undercoat
The undercoat in red speckle dogs must be red, not white nor cream. In heavily speckled dogs only, areas of white may possibly include a small amount of white undercoat hair.

Red Speckle
Red speckle is produced by small, irregular groups of white hair clustered together in strips distributed more or less evenly through the coat against a red background. The size of the speckle is, normally from slightly less than ½ inch up to approximately one inch. Some dogs are heavily speckled, and some are more moderately speckled, but they should never be solid red. This would be the absence of intermingled white hairs which is incorrect.

Red speckle is the only color provided for in the standard for red dogs. Given the three variations mentioned in the blue standard, there are often questions about why the parallel colors/patterns do not exist in the red. The precise rationale is not well documented in our breed history. While not everyone agrees, there is speculation that avoiding a solid red dog, that could be mistaken for the predatory red dingoes, was particularly important. The speckling in the Australian Cattle Dog was essential to this distinction and thus emphasized in the standard. This does not answer why red mottle was not mentioned in the standard since it does occur. 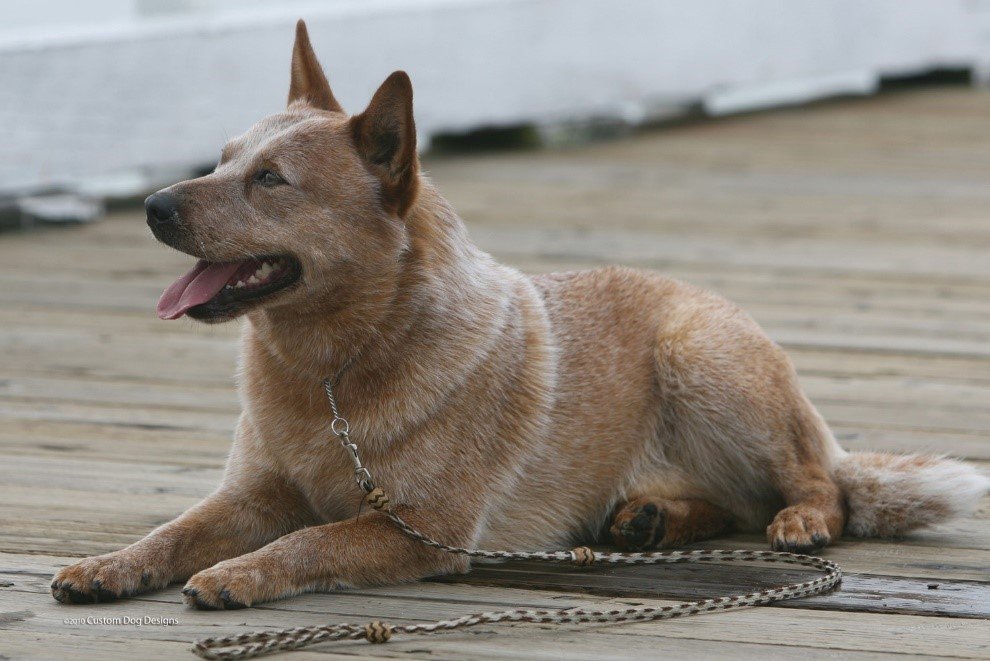 Absence of speckle is undesirable as are black hairs showing through the coats of red dogs. A black/blue muzzle and/or blue overlay on red speckle dogs is undesirable.

Questions, suggestions and/or comments?
Please contact the Standards and Education Committee at: StandardsEducation@acdca.org

3 See http://www.doggenetics.co.uk/index.htm for a summary of information on coat color genetics

Can An AKC Registration Save A Herding Breed? 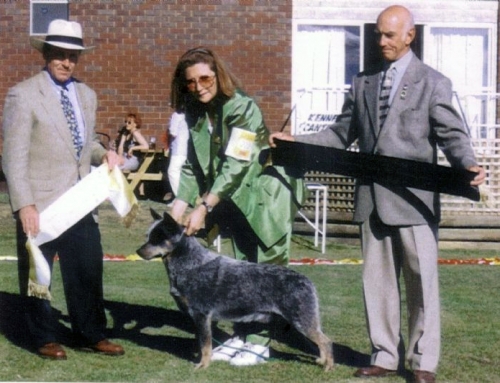