I am a second-generation dog person who grew up in the world of Sporting, Working, Terrier and Hound breeds as a youngster. As I approached University age, I began breeding and showing Bull Terriers (under the Kennel Name Bejobos) in the 60’sand 70’s. Our breeding program was quite successful allowing us to breed and finish a number of Champions winning Groups and BIS’s. A few years later, we became interested in Bedlingtons. As with the Bull Terriers, the Bedlingtons proved very successful for my wife and I in the show ring. As time passed other breeds entered our lives - West Highland White Terriers, Smooth Fox Terriers, Shih Tzu, Greyhound, Schipperkes, French Bulldogs and Miniature Bull Terriers.

I began judging Terriers in 1971. I have been granted approval, in the United States, for All Breeds. I now judge extensively throughout the year, and do not show or breed dogs any more. My judging has taken me to all parts of the United States, as well as, Canada, Mexico, South America, Australia, New Zealand, Africa, the Far East, Russia and Europe.

Judging has given me the opportunity to meet wonderful people all over the world, and see the types of dogs they breed and show.

I would like to thank the membership for the honor of judging sweepstakes for a breed that has enriched my life for almost 25 years. My love for the breed came when I met my first Australian Cattle Dog when I was horse trainer for a barn in Michigan. After college, I acquired my first Australian Cattle Dog named Quid Pro Quo Buckaroo as I was trading the horses for dogs. Since that time I have not looked back. I have owned, trained, and loved dogs that have attained titles/certifications in Agility, Rally, Obedience, Herding, Conformation, Weight Pull, Dock Diving, Lure Coursing, Schutzhund, and Therapy Dog among other activities.

I have bred two litters which have produced advanced titled dogs in both performance and conformation including GCHB Can GCH AOMx4 Psycht’s Unforgiving Minute HIC BN CDX NAP NJP DJ (Kipling). Kipling is a group-winning, Multiple HIT obedience dog who was the first Australian Cattle Dog to win an AKC OHBIS. He was also my first breeder-owner-handled conformation champion.

I am thankful for the many breed enthusiasts that have graciously shared their knowledge with me though out the years. There are far too many individuals to list that have had an impact on me within Australian Cattle Dogs. The National Specialty is a time to come together and celebrate our fantastic breed and I look forward to being in the ring with you this September 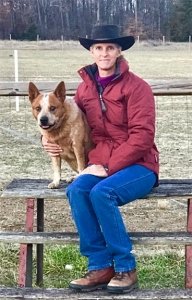 Stacey's introduction to working stock dogs came in 1982 while helping on a cattle ranch in central New Mexico. That was also the beginning of her love for the Australian Cattle Dog. It was 10 years later when she got involved with training dogs for herding trials and her first trial dog was also her first registered Australian Cattle Dog. That dog was Kylie's Ericka Shurcan Shine, who became an AKC Herding Champion/Dual Champion, an AHBA Herding Trial Champion and an ASCA Working Trial Champion. Since that time Stacey has trained and competed with a number of different breeds including Kelpies, Border Collies, German Shepherds, Collies, Australian Shepherds, Shelties, Briards, Bouviers and Rottweilers but her main focus and passion continues to be the Australian Cattle Dog. She has put numerous advanced titles, and several Herding Championships, on a wide variety of dogs and breeds with many of those dogs earning multiple High In Trials and Reserve High In Trials including at the Australian Cattle Dog and German Shepherd National Specialties. Stacey has experience with many of the herding venues and organizations including AKC, AHBA, ASCA and USBCHA and is a licensed herding judge for AKC and AHBA.

This is Stacey's second time judging the ACDCA National Specialty herding trials and she considers it an honor to have been asked to do so.

Terry LeClair has been competing since 2004 when he first ventured onto the agility field with his little border collie Heath (Mach6 Pach ADCH-Platinum PDCH-Platinum with wins (USDAA and UKI national champion) and placements at various Nationals and a trip to the AKC invitational) and now competes with his 8 year old border collie Mach ADCH Loki and his 3 year old border collie Tommy (AX AXJ Abba Rapid Fire Fun). After working in Silicon Valley for many years in startups, where he was conveniently able to train at Powerpaws under Nancy Gyes and Jim Basic, he retired to the Sierra Foothills and trains and holds a few trials at Heath Bar Ranch in Shingle Springs. Terry has been an AKC judge since 2012 and judged the 2019 AKC Agility Invitational.